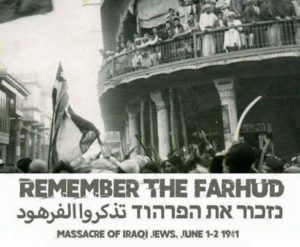 This article was first published in The Huffington Post on June 11, 2016

Last week marked the anniversary of the farhud, the pro-Nazi massacre of Jews in Baghdad, Iraq, in 1941. Hajj Amin al-Husayni, the mufti of Jerusalem, was a Nazi sympathizer who had met with Hitler in Germany and incited genocidal violence against the Jews throughout the Middle East and North Africa. More important than knowing this fact from history books, I know it from the personal experience of my family – Jewish refugees from Iraq, who survived the farhud.

Earlier that year, numerous Arab leaders — most notably Hajj Amin al-Husayni, the mufti of Jerusalem — arrived in Berlin, as guests of the Nazi regime. Al-Husayni drafted a political declaration, which he presented to the Axis allies of Nazi Germany and fascist Italy, in the hope they would adopt it. In paragraph seven of the declaration, he would have Germany and Italy “recognize the rights of Palestine and other Arab countries [to] resolve the problem of the Jewish elements in Palestine and the other Arab countries in the same way as the problem was resolved in the Axis countries” — i.e., through genocide.

Furthermore, in a meeting between Hitler and al-Husayni, on Nov. 28, 1941, Hitler promised al-Husayni that “[the] Führer would offer the Arab world his personal assurance that the hour of liberation had struck. Thereafter, Germany’s only remaining objective in the region would be limited to the annihilation of the Jews living under British protection in Arab lands.”

With these assurances, al-Husayni voiced his hope for a “final solution” to the Jewish presence in the Middle East, in a speech given at a rally in Berlin on Nov. 2, 1943. “National Socialist Germany knows the Jews well and has decided to find a final solution for the Jewish danger which will end the evil in the world. The Arabs especially, and Muslims in general, are obliged to make this their goal, from which they will not stray and which they must reach with all their powers: it is the expulsion of all Jews from Arab and Muslim lands.”

Mind you, Jews had lived in these “Arab and Muslim lands” for over 2,500 years, since the Babylonian conquest of ancient Israel in 586 BCE. The Arab Muslim conquest of the region, and therefore presence throughout the region, came about 1,300 years later. So who is the occupier here?

This past November, a surge of anti-Israel/anti-Jewish violence started because of a rumor that Israel was changing the status on the Temple Mount. The uproar was tragically ironic, given that Muslim leaders have a history of taking over Jewish holy sites, turning them into mosques, and barring Jews from entry. During the rule of the Ottoman Empire, for example, my grandfather Abraham made yearly pilgrimage from Baghdad to Hebron, to pray at the cave of Abraham and Sarah, the Jewish patriarch and matriarch. Year after year, however, Muslim occupation of the site forbade him from entry. Not only does a mosque stand on top of the holiest Jewish site in the world, on the Temple Mount, but a mosque also stands over that cave.

My heart breaks when the Left – the space that should be safe for someone with my progressive social justice politics – endorses, enables, or otherwise justifies the massacre of Jews, in the name of anti-racist activism. It has not escaped my notice that this “community” simultaneously ignores or shuts down conversation about the experience of Jews indigenous to the Middle East and North Africa, being that we are what Al Gore might call “an inconvenient truth” – complicating the Arab/Jew, right/wrong, black/white divides.

One of the most telling examples was at a rally at San Francisco State University, about 15 years ago. Jewish refugees from Libya and Egypt shared their personal stories, talking not only about the mobs that came after them but also the courageous individual Arabs who helped save them. Despite having dark skin; despite sharing where they were from; despite speaking with Arabic accents; and despite opening their talks in their mother tongue of Arabic, “peace” activists gathered opposite, shouting, “Go back to Europe!” and “Hitler should have finished what he started!”

What is one to do with this level of ignorance, pigheadedness, and vitriol? How did genocide of one people get to be equated with liberation of another? Sadly, variations on the Hitler statement are not that uncommon around anything that has to do with Israel, and indeed, genocide has always been justified by its perpetrators and supporters.

Pro-Nazi Arab violence destabilized the Middle East and led to a chain reaction of events resulting in 900,000 Jewish refugees from Iraq, Yemen, Syria, Egypt, Morocco, and other countries throughout the region. Our families were abruptly uprooted from our homes of thousands of years. Our collective property – estimated at billions of dollars today – was confiscated and nationalized by the Arab governments. Our families did not get a penny from any UNRWA type organization, and to this day, we barely receive recognition for what our families have been through, never mind getting reparations.

Meanwhile, Arab states did not absorb refugees from the war against Israel in 1948. Instead, they built squalid camps in the West Bank and Gaza — at the time controlled by Jordan and Egypt — and dumped the refugees in them, Arabs doomed to become pawns in a public relations war against Israel. Countries such as Syria, Iraq, Saudi Arabia, Libya and Lebanon funded assaults against Israeli citizens instead of funding basic medical, educational and housing needs of Palestinian refugee families.

And yet, the 22 Arab states dominate both the land and the wealth of the region. So who is  responsible for creating Palestinian desperation?

Tragically, the Arab public relations war against Israel has been a brilliant success, laying on Israel all the blame for the Palestinian refugee problem. By refusing to hold Arab leadership accountable for its actions and responsible to its people, and by justifying brutality against Israeli Jews in the name of “peace,” the progressive movement enables racism against Jews and feeds the never-ending cycle of violence in the Middle East.