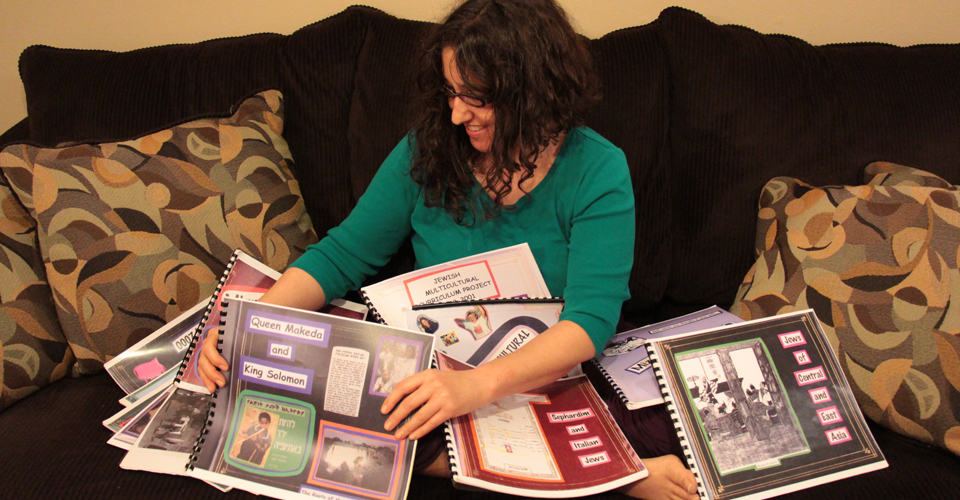 Loolwa’s programs included workshops on global Jewish migration from the beginnings of the Jewish people to the present day; year-long curricula on Jewish history, culture, scholarly works, and religious practices from around the world; lectures on the 900,000 Jewish refugees from throughout the Middle East and North Africa and the implications for the Arab-Israel relationship; classes on global Jewish songs, prayers, food, and religious rituals; training for educators interested in teaching Jewish multiculturalism but lacking the knowledge; and thought-provoking dialogue about Jew-on-Jew racism and the implications for Jewish identity, education, and community.

As part of this work, Loolwa founded and directed numerous organizations: Student Organization for Jews from Iran and Arab Countries (SOJIAC), initially launched at Columbia University and ultimately incorporated into the Jewish Federation of Greater Los Angeles; the One People, Many Voices Coalition, a consortium of leading Sephardic, Orthodox, Conservative, Reform, and Reconstructionist synagogues in Los Angeles, offering monthly programs on Jewish multiculturalism; the Jewish Multicultural Club at Berkeley Hillel, which attracted about 100 unaffiliated Jews, mostly Jews of color, in its first semester; the Jewish Multicultural Curriculum Project, through which Loolwa designed and implemented the first-ever curriculum about Jews worldwide; Jews Indigenous to the Middle East and North Africa (JIMENA, co-founded), which taught about the forgotten refugees from the Middle East crisis; and the Community Integration Project, which facilitated understanding and community-building between Jews of Persian and European heritage in Los Angeles.

In Jewish and mainstream media, both as an author and featured expert, Loolwa paved the way for stories on Jewish multiculturalism, ultimately leading to a more balanced representation of Jewish life and identity. To this end, her work was featured in outlets including Rolling Stone, NBC, The Washington Post, CNN, Marie Claire, NPR, The Boston Globe, ELLE Girl, The San Francisco Chronicle, and BBC News, as well as in the Jewish Journal of Los Angeles, Forward, Lilith, Jerusalem Public RelationsPost, Tikkun, Bridges, Jewish Independent, Jewish Bulletin, Hadassah, and Jewish Telegraphic Agency.

Loolwa additionally was featured in three documentaries, speaking about Jewish multiculturalism – The Way Home, The Forgotten Refugees, and Young, Jewish, and Left, and she was a radio DJ for WKCR in New York City, where she hosted the weekly “Balagan” show, featuring contemporary music from Israel, including songs from her beloved Ofra Haza. When she was 23 years old, as part of its 18th anniversary feature, Lilith magazine named Loolwa one of 18 Jewish women to watch out for, and a decade later, Heeb magazine named Loolwa one of the Heeb Hundred movers and shakers.

The Power of Names

When Loolwa was growing up in the 1970s and 1980s, “Jewish” meant Ashkenazi, ie, Jewish from Central and Eastern Europe. An Ashkenazi synagogue was just a “synagogue,” whereas a synagogue from any other heritage was a “Sephardic synagogue,” qualified, with the implication that it was not really Jewish. (For the record, non-Ashkenazi Jews were dumped into one category of Sephardic, which refers to Spanish-Portuguese descent, though they were in fact from diverse lineages, including Mizrahi – indigenous to the Middle East and North Africa.)

In response, Jews from Algeria, India, Turkey, China, and so on were divided into two camps: those who assimilated into an Ashkenazi reality and those who became part of separate, even separatist, Sephardic organizations. Loolwa found both options unacceptable and dreamed of a united Jewish community, where “Jewish” would embrace all Jews from across the globe, spanning 4,000 back to the beginning of the Jewish people in Mesopotamia, the land of today’s Iraq.

A natural public relations manager from a young age, Loolwa noticed the power of language, both as a reflection of beliefs and values and as a tool for transformation. And so, when she stepped into a position of student leadership at Columbia University, she created programs that refrained entirely from using the term “Sephardic.” Jews related to the word “Jew” or “Jewish,” she reasoned, whereas the term Sephardic seemed foreign to them, and therefore, alienating and irrelevant. By calling a program, “High Holiday prayers of Jews from the Middle East,” she thought, instead of “Sephardic High Holiday prayers,” Jewish students would relate to the “Jews” part, be curious about the other part, and show up.

She was right. Not only did her programs attract Sephardic and Mizrahi students who never had come to Jewish programs before, because they had felt alienated, but the programs also attracted Ashkenazi students, during a time that Sephardic was not yet considered sexy or cool, meaning that Ashkenazi Jews rarely, if ever, showed up to anything billed as Sephardic. Loolwa knew she was onto something.

Still, after graduating college and continuing her work in the greater Los Angeles area, Loolwa noticed that while Jews of all ethnicities came to her programs, Ashkenazi Jews spoke in terms of “you” (non-Azhkenazi Jews) and “us” (Ashkenazi Jews). How, Loolwa wondered, could she convey the message that all Jews are “us”? The question became her obsession. Then, in 1993, Loolwa was asked to speak at the Women’s Division of the Jewish Community Federation in Los Angeles. Her presentation happened to fall between the Jewish holidays of Purim and Pesah (Passover), and Loolwa was eager to incorporate a message from the holidays into her presentation. Burning the midnight oil, she suddenly realized how to solve the problem that had been keeping her up at nights:

“What holiday did we just celebrate?” she asked the women gathered before her, on the day of her presentation. “Purim,” they answered. “Where did Purim take place?” she continued. “Persia,” they replied. “Where is Persia today?” Loolwa pressed. “Iran,” they answered. “How many people here know how Iranian Jews celebrate Purim?” Loolwa asked. Nobody raised a hand. Loolwa presented the same dilemma with Pesah: The holiday story took place in Egypt, but how many of the women knew the Egyptian traditions for celebrating Pesah? Without Loolwa offering any commentary, women’s heads started nodding in comprehension.

“As we go story by story through the history and heritage of the Jewish people,” Loolwa elaborated, “we find that Judaism is rooted deeply in the Middle East and North Africa: Abraham and Sarah, Moses and Miriam, the Talmud, the first yeshivas, and the Hebrew language all come from the Middle East. Purim tells the story about Iranian Jews, Passover tells the story about Egyptian Jews, and so on. So whether your family is from Poland, Germany, Morocco, Yemen, or wherever, the Middle Eastern and North African Jewish heritage is a part of your Jewish heritage. But how much do you know about this part of your Jewish identity?”

When Loolwa finished her presentation twenty minutes later, a woman raised her hand. With deep concern in her voice, she asked, “How do we solve this problem?”

Loolwa had discovered the magic words to shift community consciousness, and she was elated. The woman said “we”! From then on, Loolwa incorporated the same introduction into all her workshops. Participants responded enthusiastically, often remarking they never had connected the obvious dots before. “We teach about Egypt and Persia like they were some mythological faraway places,” one Hebrew teacher commented. “But you’re right, they are concrete places where Jews lived until recently.”

During this period, as Loolwa fine-tuned her approach to reaching the hearts and minds of the Jewish mainstream, “multiculturalism” became all the rage. Ironically, Jewish leaders and activists were at the forefront of the multicultural movement but were clueless about and even resistant to multiculturalism within the Jewish community. As a matter of course, Black Jews were not invited to speak on panels about Black-Jewish relations, and Jews indigenous to the Middle East and North Africa were not invited to participate in Arab-Jewish dialogue. Program facilitators regularly would stretch themselves trying to find common bonds between two given communities, when the natural link was so obvious, and yet, so absent.

Recognizing an entry point, Loolwa rode the multicultural wave, coining the term “Jewish Multiculturalism” and dubbing herself a “Jewish Multicultural Educator.” Initially, Jewish leaders and lay people assumed she was teaching Jews (meaning white Ashkenazim) about multiculturalism (meaning non-Jewish people of color). As Loolwa continued widely speaking about and publishing on the subject, however, people came to understand the meaning, as well as the new paradigm it represented, and the term caught on.

With the foundation of Loolwa’s ground-breaking and tireless work over the years, Jewish leaders began to have a point of reference for, understanding of, and value for Jewish multiculturalism – making it easier for those who came after Loolwa to gain access to the Jewish mainstream and promote Jewish diversity from within. To this end, beginning in the mid-1990s, there was a proliferation of media, programs, and organizations following Loolwa’s language and model of Jewish inclusivity – shifting away from the Ashkenazi/Sephardic, us/them orientation and moving toward one of embracing the full spectrum of Jewish identity, history, heritage, and culture.

After 20 years of devoting her life to the cause, Loolwa hung up her hat and moved on to other pursuits, guiding people on healing from chronic illness, offering public relations management to cutting-edge thinkers, and launching her band, Iraqis in Pajamas – featuring a mashup of ancient Iraqi Jewish prayers, original lyrics, and original music fusing multiple genres including rock, folk, jazz, and New Age.

Book Loolwa and her band to come to your venue for inspirational programs!