Loolwa Khazzoom was born a natural musician. Throughout her childhood, she studied flute and piano at the San Francisco Conservatory of Music, and in college, she studied recording engineering at Columbia University. She has written original music ranging from punk rock to chamber music; she has performed as a singer, drummer, bass player, pianist, and flutist, at venues internationally; and she has recorded five albums and additional tracks, with bands and other music projects for which she was the singer, songwriter, and multi-instrumentalist. 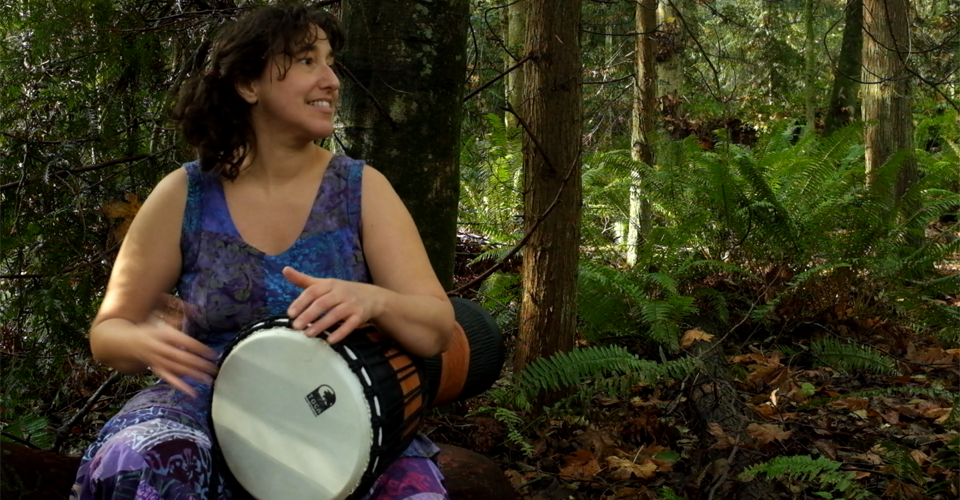 Loolwa additionally has written about music for periodicals including Rolling Stone and The Boston Globe, specializing in the music of Jews from Middle Eastern, North African, and Ethiopian Jewish heritage; and she was the first woman worldwide to lead Mizrahi–Sephardi prayers for congregations, which she did regularly from 1990-2010. Today, along with her band Iraqis in Pajamas, Loolwa facilitates music-driven programs that feature inspirational story-sharing with and between audience members – creating an environment where people can express and celebrate the raw authenticity of their souls.

It Started with a Song

Loolwa began singing before she began speaking. When she was three months old, her mom was driving somewhere, with Loolwa strapped into the back seat. During the trip, Loolwa began wordlessly singing the melody of, and bouncing around to, one of the ancient shebahoth (songs of praise) from the Iraqi Jewish tradition, which her family sang every Shebath (Jewish sabbath). Loolwa’s mom nearly had an accident, looking back in the rear view mirror, in shock. Loolwa has been singing ever since, ultimately at venues across the globe.

As soon as her chubby little arms could reach the table (and anything else she could touch), Loolwa began drumming. Rhythm flowed through her, and inner music permeated her every experience. In addition, from the time she was a toddler, she regularly “made up stuff” on the family’s plastic organ. Loolwa will never forget when she was four years old, mesmerized while sitting next to friend playing piano, and the friend asked, “Would you like to learn how to play?” It was as if that friend had just offered Loolwa the keys to a magical realm.

A Piano of One’s Own

The Khazzooms didn’t give an allowance, but rather, had a “behavior modification system” in place, where the kids received pluses and minuses worth 5¢ each – for example, getting 10 pluses (50¢) for vacuuming the house and 20 minuses ($1) for “misbehaving,” however the parental units defined that. And so Loolwa became a domestic servant for the next two years – making meals, taking out the trash, cleaning the toilet bowl, vacuuming, whatever she could do to make enough money to buy a piano. Whenever she cashed in her pluses, she would put the money in her Mickey Mouse puzzle box, counting it every now and then, to see how far she had progressed.

When Loolwa was eight years old, she approached her parents with $300 in cash. “Now can I have a piano?” she asked. Her parents were blown away that Loolwa had been saving money for a piano that whole time, and they suddenly realized the depth of her passion for and devotion to music. Together, the family went to buy Loolwa a used piano, with Loolwa giving all of her $300 hard-earned pluses money, and her parents chipping the remaining balance of $200. Her parents subsequently enrolled Loolwa in music school, where she studied piano and flute, until she graduated high school. Meanwhile, in public school, Loolwa learned to play every instrument that called to her – including guitar, violin, trumpet, oboe, timpani, piccolo, and French horn.

At home, Loolwa continued to sing the ancient Iraqi Jewish songs and prayers, in Hebrew and Judeo-Arabic, but found herself repeatedly frustrated that she was forbidden from leading services in the synagogues. Girls were treated as inferior to boys and relegated to the back of the synagogue, behind the mehisa (four-foot wall separating men and women). And so Loolwa’s devotion to her religious heritage, along with her competency in leading prayers in the authentic Iraqi tradition, were dismissed as worthless.

Undaunted, Loolwa went on to devote 20 years of her life to ground-breaking work as a Jewish multicultural educator. As part of this work, she brought girls and women to the forefront – among other things, publishing The Flying Camel, the first anthology by and about Jewish women of color, which brought to light the kinds of issues Loolwa faced as a girl in her community. After two decades of dealing with all the politics, power games, racism/sexism/ageism, and other insufferable bullshit, however, Loolwa decided it was time to put herself first and move on. She then turned her attention to blogging about her healing journey, facilitating natural pain relief programs, and, offering public relations management services to holistic health practitioners and thought leaders.

Return of the Piano

Meanwhile, Loolwa’s music faded into the background and then disappeared, for over a decade, to the point that when she felt bored and wanted to go in a new direction, the idea of pursuing music did not even occur to her. Then, in a meditation, Loolwa had a vision of a piano before her. “I don’t know what to do!” Loolwa exclaimed in this vision, distressed, so long had it been since she had played. “Just put your fingers on the keys, and they will know,” a voice said in response.

A couple weeks later, Loolwa went to a women’s creativity retreat in the forest. When she walked into the common room, a grand piano stood before her. Just as had happened in the vision, she walked up to it and thought, “I don’t know what to do,” to which a voice replied, “Just put your fingers on the keys, and they will know.” Loolwa placed her fingers on the keys, nervous. She played, made mistakes, stopped, played again, made more mistakes, and stopped again, anxious that people sitting nearby were listening.

Loolwa then took a deep breath and guided herself on getting her mind out of the way and letting her body step into the driver’s seat. She put her fingers back on the keys. Pieces that she hadn’t played a decade or two suddenly came flowing back through her fingers – a little bit more each time, until she was able to play from start to finish. Following this retreat, Loolwa bought a keyboard and promised herself never to let her music fall into the background again.

Shortly after, Loolwa moved out of state, to Seattle, primarily to join the large Sephardic community in the area, but also to start a band. On her first shebath in Seattle, Loolwa went to the synagogue in the afternoon and found the congregation in the social hall, listening to a lecture. Shortly into the talk, the speaker made deeply sexist remarks. “Do I really have to be the rabble rouser, just five minutes into arriving?” Loolwa thought, looking around at the timid women and laughing men. She tried the whole “accept what works for you and leave the rest behind” approach but could not help feeling complicit by staying and doing nothing.

So she got up and left the room, heading to the sanctuary, to wait for evening prayers. “Basically I’m waiting for men who either said, endorsed (through laughter) or enabled (through silence) something hurtful toward women, to come in here and intercede in my prayers to G-d, while forbidding me from singing above a whisper, because I’m a woman,” Loolwa thought. “This is bullshit, and I won’t be part of it.” She got up and left, going to a local park by the lake, where she prayed to G-d without interference, ruminating on how she had just uprooted her whole life for this synagogue, and wondering what her next step would be.

Three months later, as Loolwa bounced around the various synagogues in Seattle, looking for home, the High Holy Days arrived. By then, Loolwa was singing and playing bass at an open mic, at a local bar, each week. “I moved to Seattle for the Middle Eastern synagogue,” she said to the audience, one night during the holy day period, “but they don’t want me to pray audibly, because I’m a woman. So I’m bringing my prayers here.” Loolwa then belted out, a cappella, the Iraqi selihoth – the prayers of atonement. While audience members typically talk loudly and incessantly throughout open mic performances, one could hear a pin drop as Loolwa sang. “Oh,” she thought, “this is the start of something.”

And so Loolwa began writing songs about her struggles with her family and community, blending original lyrics and punk rock music with ancient Iraqi Jewish songs and prayers – effectively creating a mobile synagogue that worked for her. After decades of passing down to others what her father had passed down to her, and what her ancestors had passed down to him, in turn, throughout the generations, Loolwa put her unique stamp on her rich heritage and made it truly her own. She now shares her original music, through her band, Iraqis in Pajamas.

Book Loolwa and her band for your venue!