Loolwa Khazzoom is the author if Consequence: Beyond Resisting Rape and is editor of The Flying Camel: Essays on Identity by Women of North African and Middle Eastern Jewish Heritage, which are taught throughout the Ivy League and at universities nationwide. Loolwa has spoken globally about young women, power, and sexual politics, at venues including Ladyfest and The Jerusalem Cinematheque, and she has written numerous essays on topic, for anthologies including That Takes Ovaries! and Body Outlaws. 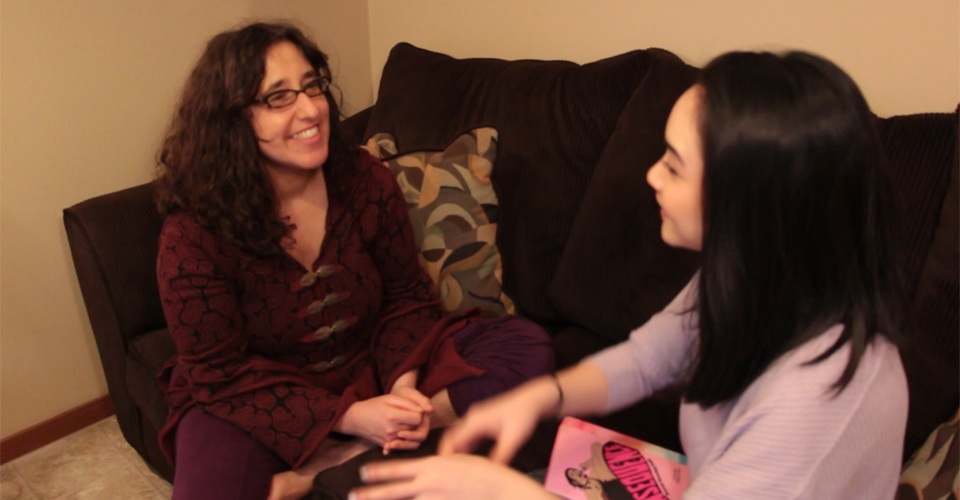 From a young age, Loolwa Khazzoom recognized the absurdity and inequity of gender roles, and she refused to participate in them. When she was three years old, she was playing checkers with her dad. “Ha!” he declared midway through the game. “I got a king!” “It’s a queen,” Loolwa countered. Around that time, in the mid-1970s, it was the norm for women to change their names upon marriage. “I won’t change my name for some boy,” Loolwa informed her sister at the age of six. “He can change his name for me.” Besides, she added, “my name is cooler anyhow!”

Throughout her young childhood, Loolwa routinely tackled any male friends that her older sister brought to visit. The boys were all in their pre-teens or teens, twice Loolwa’s size, but that just made it all the more fun. Meanwhile, Loolwa enjoyed terrorizing the boys in elementary school. “Oh yeah?” she challenged before chasing them down. “You think you’re stronger than girls?” Eventually, the boys organized and, one day, appeared out of nowhere and pinned Loolwa down on the playground bars, where she was doing gymnastics. “It takes all of you to stop one of me!” Loolwa shouted defiantly. Her friend Pat – a girl twice as big as any of the boys – came to Loolwa’s rescue, glaring down at the boys and saying menacingly, “You let my friend go.” They obliged. Yay for girls saving girls! Girls also saved boys, as Loolwa routinely intervened in playground violence – throwing herself between bullies and victims, typically boys on each end. “What are you going to do?” she challenged, in the bully’s face. Invariably, he would back down.

Loolwa not only rejected but also mocked all social expectations for girls. To this end, when she was nine, she loved to put on her sister’s brown leotard, which hung down to her knees, and jump around the room, yelling, “Put up your dukes and fight like a girl!” Even then, her public relations savvy was at play – redefining terms and turning them on their head. It was all about the spin! In this regard, Loolwa understood from a young age that physical weakness among girls and women was actively created, in part by the lack of opportunity and encouragement that girls were given to step into their power. And so, when Loolwa would go shopping with her parents, she would pick up the bags, to help bring them into the house. “Let me take that for you,” her parents initially would say. “It’s heavy.” “If I don’t lift heavy things,” Loolwa countered, always insisting on taking the bags, “how am I going to get strong?”

As a general rule, Loolwa was socially condemned, more than congratulated, for her spirit and strength. “You’re too smart/loud/strong/fill-in-the-blank,” people would tell her. When they were shocked by the extent of Loolwa’s physical power, they would make remarks like, “What are you, a man?” In other words, they started with the premise that strength=male, and that therefore, if Loolwa was strong past a certain point, she was no longer all that female. Meanwhile, throughout her childhood, Loolwa’s male friends received the inverse indoctrination and condemnation: “You’re too soft/weak/sensitive/fill-in-the-blank,” people would say to them.

Loolwa’s classic snapshot of gender absurdity occurred when she was 10 years old. She and her best friend, a boy, were playing in the woods. Loolwa was running around in the trees, when she realized that her friend had gone missing. She back-tracked and found him sitting by the stream, looking intently at the water, holding a plastic bowl in his hand. “What are you doing?” she asked. “Trying to catch a frog,” he answered. Apparently he’d been having some difficulty with the whole catching part. It was just a year before Loolwa became a vegetarian, and already she was adamant about ethical treatment of animals. So she gave her friend a piece of her mind, admonishing him to leave that poor frog along. Her friend burst into tears, explaining that his parents, both immigrants, wanted him to be more like an American boy and do boy things like catching frogs.

Feeling compassion for her friend, Loolwa reached out her hand and said, “Here, give me that,” following which she took the bowl, scooped up the frog in a nanosecond, and said, “Let’s go.” Her friend’s parents were glowing with pride when her friend presented the frog to them. While Loolwa was pleased to have supported her friend, and while there was a delicious subversiveness to the whole thing, which her friend and she secretly shared, Loolwa was poignantly aware of how sad and what bullshit the whole setup was.

Many other experiences chiseled Loolwa’s understanding of gender roles and the ways they can squelch someone’s authentic self-expression, to the point that they can crush someone’s soul. Loolwa was forbidden from leading prayers in her Middle Eastern synagogue, despite being the rare child who knew and passionately embraced the traditions of her Iraqi heritage – leading Loolwa to hold back in her intelligence and spirit in some ways, despite her tremendous strength and resilience in the face of gender norms. She also suffered from covert sexual abuse in her family, always disguised and passed off as something else – adversely impacting Loolwa on multiple levels, for decades to come.

In her teens and young adult years, Loolwa also encountered garden-variety forms of violence against women, from incessant street harassment of young women, to sexual encounters where men routinely tried to push intercourse. In addition, her heart was broken repeatedly from men who left her in search of a woman who perhaps was smart and strong, but not that smart and strong, and definitely not that outspoken!

Gender expectations even were at play when Loolwa faced health challenges: Following a hit-and-run, head-on car collision in 1997, Loolwa’s doctor dismissed her complaints of pain and limited mobility. She had nosedived from being able to jog 12 miles at a shot, to hardly being able to walk. Her compromised strength was not taken seriously or treated properly, however, leading to a decade of debilitating chronic pain that could have been prevented, had the medical system been responsive. Adding insult to injury, when Loolwa asked for help carrying things, because of the pain, nobody ever blinked. She was a woman, so it was expected for her to be “weak.”

Throughout it all, Loolwa has remained true to herself and has stayed outspoken, both about the distortion of gender constructs and the healing potential of new female/male paradigms. In addition to publishing widely and facilitating programs on topic, Loolwa has served as a personal role model for little girls and has helped shape little boys into different kinds of men.

As a third grade teacher in her 20s, for example, when two boys got into a fight, Loolwa guided them on how to express their feelings and listen to each other, instead of yelling and hitting. Over time, those and other boys in Loolwa’s class learned to be vulnerable and share their feelings from the outset, rather than getting into a brawl, and they became skilled at managing conflict on their own. Loolwa’s classroom was such a safe place for children to explore and express their souls, in fact, that when the class put on a Jewish play from the Middle East, a boy requested to change one of the boy parts into a girl part and to play the girl. Of course, Loolwa welcomed turning the gender roles on their head!

Today, through her songwriting and irreverent motivational speaking programs, which begin with a performance by Loolwa’s band, Loolwa invites audience members to unpack and rebuild notions of feminine and masculine, in ways that are healthy, authentic, and playful.

Book Loolwa and her band to come to your venue for inspirational programs!