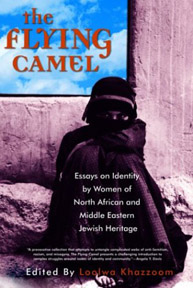 The Flying Camel: Essays on Identity by Women of North African and Middle Eastern Jewish Heritage (Seal Press) brings to the public eye a world often hidden from view. Anthology contributors bridge divisions between Arab and Jew, East and West, and they are impacted directly by tensions between Islam, Judaism, and Christianity. Contributors possess the refreshing lens of those on the edge, insiders and outsiders to many different worlds. Pushed and pulled by the strong currents of today’s identity politics, they remain steadfast and refuse to be defined as “other” or “less than” by any of the communities to which they belong. As such, their stories sweep readers into a surprising journey of discovery. Each essay unveils the rich, multi-colored texture of identities commonly portrayed as one-dimensional or black & white.

Seventeen women share the joys and struggles of stepping forth from the shadows, demanding to be heard. Vivid, gripping narratives include the daring of a young Libyan woman who single-handedly rescued her family from assassination and the sexual rebellion of a traditional Iranian woman who grew up wearing a veil. Click here for summaries.

Early in the feminist movement, it was ground-breaking when anthologies were published representing African, Asian, and Latina women’s voices. The Flying Camel offers a similar challenge to Jewish women’s literature specifically and women’s literature in general. For this reason, numerous feminist leaders have endorsed this book, including Rebecca Walker, Angela Davis, Letty Cottin-Pogrebin, and Susan Weidman Schneider. In addition, professors from Harvard, Yale, Princeton, Columbia, Stanford, and numerous other private and state schools throughout the country have endorsed the book. Click here for endorsements.

The rich and complex experience of North African and Middle Eastern Jewish women cannot be captured in a single article or story. I am heartened that Ms. Khazzoom has edited an anthology which begins to address this complexity. The Flying Camel helps provide the broader perspective that is needed in all Jewish courses, a perspective that many of my colleagues seek.

There is no question that The Flying Camel fills a gap in the available literature on the intersections between gender, ethnicity, nationality, and religion. I know of no such book of first-person, experiential accounts by Jewish women of color; the very idea of the book complicates the notion of “the Jewish community” in interesting and useful ways. This book is a useful undergraduate teaching tool for Women’s Studies courses, Ethnic Studies courses, Judaic Studies courses, and for Sociology courses that deal with the complexity of collective and individual identities.

There is no question that a more thoughtful view of the role of North African and Middle Eastern Jews, particularly those of the women, is crucial to an understanding of many issues relating to Middle Eastern society and history, and The Flying Camel is a most valuable contribution.

The Flying Camel provides a wonderful opportunity to reflect on an unjustly neglected identity and to see it through the eyes of those who have lived it. It is certainly true that the lives of Jewish women from the Arabic-speaking world are unknown to too many in our society and that our understanding of questions of Arab, Jewish, and American identities are diminished by our ignorance. I find this book useful in the courses I teach on questions of identity and ethics in the contemporary world.

As the interest in Jewish Women’s Studies continues to grow, we become more sensitive to the gaps in our knowledge. It is imperative that we include in our understanding of the field the historic and contemporary experience of the full range of Jewish women. Loolwa Khazzoom’s book fills in an area which is often overlooked and thus provides ample material both for those engaged in the academic study of the field and for the large group of non-academic interested readers.