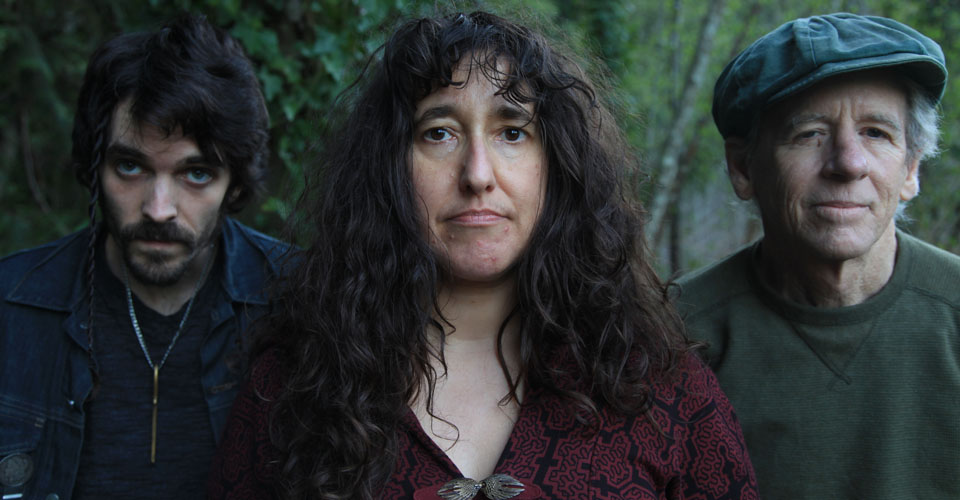 Iraqis in Pajamas fuses ancient Iraqi Jewish prayers, personal storytelling, original lyrics, and original music fusing multiple genres – including rock, folk, jazz, and New Age. Front woman Loolwa Khazzoom belts out tunes in Judeo-Arabic, Hebrew, and English, with Sean Sebastian on guitar and Robbie Morsehead on drums. In turn vulnerable and angry, haunting and inspiring, the band disarms audiences, opening them to deep contemplation about trauma, healing, and transformation – whether addressing domestic violence, cancer, racism, mental illness, street harassment, family caregiving, or national exile. Whatever our particular issue, how can we express our rage, our pain, our despair, without getting stuck in it? Better yet, how can we use those energies, channeling them for our own personal transformation and that of the world around us?

Iraqis in Pajamas operates as a nonprofit under the 501(c)(3) umbrella of Allied Arts Foundation. All donations through them are tax deductible to the extent provided by law. You can donate here. We currently are fundraising to produce and promote a full-length double album, Punk iRock: The first CD will be the a cappella, original version of the 10 ancient Iraqi Jewish prayers that the band incorporates into its set list, along with an introductory track about why and how the band chose to use each prayer. The second CD will be a set list of 10 Iraqis in Pajamas songs, played with the full band, in all their punk rock glory. Iraqis in Pajamas previously operated as a nonprofit under the 501(c)(3) umbrella of Healing Journeys, through which the band received funding from the Lloyd Symington Foundation, for the production of the audio track and music video of the song, “Cancer Is My Engine.”

Iraqis in Pajamas promotes healing and transformation, through the medicinal powers of storytelling, prayer, and song – inspiring people think deeply about our lives, our shared humanity, and our individual and collective power to effect positive change, whether in our bodies, our families, or our world. As part of doing so, we showcase ancient Iraqi Jewish heritage and its 21st century application – grounding listeners in tradition, while engaging them on contemporary issues. Society often indulges an oppositional attitude – such as by treating Arabs and Jews as mortal enemies, and by waging a “war on cancer.” Through catchy and accessible songs about front woman Loolwa Khazzoom’s life (Loolwa being, among other things, an Iraqi Jew who has approached cancer as an opportunity for healing and transformation), Iraqis in Pajamas challenges this orientation and offers an alternative paradigm – highlighting and weaving together the shared threads, complexities, and nuances of the human experience, and revealing the healing portal and transformative power of music. Because these songs integrate ancient Iraqi Jewish prayers, the band not only revives a 2,600 year old tradition that is on the verge of extinction, but it also raises awareness of the racial and ethnic diversity of the Jewish people, and the inter-connectedness between Jewish and non-Jewish communities across the globe. Amidst a wave of hate crimes against Jews, in the USA and worldwide, it is essential to offer this kind of positive, constructive, and intimate model of shared experience and relationship-building, in particular, through heart-centered music and conversation.

As Grammy-award-winning violinist Lara Lavi says about the band, “Iraqis in Pajamas bring deeply personal truth through song and lyric and make us think through our own human reaction, through their profound and often cathartic performances.” Event organizer Katie Rudman adds that hearing the band live “is like being struck by a thunderbolt. [Their] music will crack you open and get under your skin in the best way. [Their] lyrics are raw and visceral, combining prayer with deeply personal truth.” Event organizer Stefanie Brendler concurs that a live performance “emotes an unencumbered power of grief, rage, and delight, through song and storytelling.”

Singer, songwriter, and bass player Loolwa Khazzoom has had a meandering career as an educator, activist, journalist, health coach, book author, and more, all with the central organizing principle of individual and collective healing. Her work has been featured in top media including The New York Times and Rolling Stone; she has presented at leading venues including Harvard University and the Simon Wiesenthal Center; and she has published two books, taught throughout the Ivy League and at universities nationwide. Ultimately ditching her power suit and power point in favor of combat boots and cat glasses, Loolwa now offers bold songwriting as the catalyst for deep and heart-centered conversation.

Guitarist Sean Sebastian is a professional musician, as well as an audio engineer, film maker, founder of Off the Wall Artists Collective, and owner of Bard Rock Studios. Drummer Robbie Morsehead has been a professional musician for decades, touring nationally, recording numerous albums, and playing at prestigious venues including Seattle Sounders and Microsoft.

Loolwa moved to Seattle in 2014, to be part of the Sephardic community. Within ten minutes of attending one of the two Sephardic synagogues, however, she was deeply offended by the sexism she witnessed – leading her to walk out. “What now?” she thought. Months later, close to the High Holy Days, Loolwa went to an open mic at Columbia City Theater and announced that since the Sephardic synagogues didn’t want her praying audibly, because she was a woman, she was bringing the prayers to that club. She then belted out the Iraqi selihoth. The crowd suddenly hushed, to the point that you could hear the proverbial pin drop, despite the audience typically talking through open mic performances. “Ah,” Loolwa thought, “I’m onto something.”

Meanwhile, after realizing that synagogue life in Seattle was a total bust for her, Loolwa began writing songs that expressed her struggles with Jewish family and community – combining her personal angst and original lyrics with the sacred Iraqi Jewish music she grew up singing. She effectively created a mobile synagogue of sorts, a vehicle for expressing her soul. And so, following two decades as a Jewish multicultural educator, through which Loolwa had passed down global Jewish heritage as it had been passed down for millennia, she began putting her own unique stamp on it.

What’s with the PJs?

After fleeing from Iraq as refugees in 1950, Loolwa’s family settled just outside Tel Aviv, Israel, in a town called Ramat Gan, which was almost entirely comprised of Iraqi Jewish refugees, for decades. Iraqi Jews historically have a reputation for immediately stripping out of their work clothes and lounging around in their pajamas, wherever possible. For this reason, when people asked Loolwa where she was living, and she answered Ramat Gan, they invariably replied, “Ah, Iraqim bepajamama (Iraqis in pajamas).” She thought it was hilarious. Not only that, but since Loolwa works from home, she can be found in her mismatched pajamas and fuzzy pink slippers, with her Jewfro hair sticking out in seven directions, at all hours of the day – thereby carrying on her ancestral tradition.