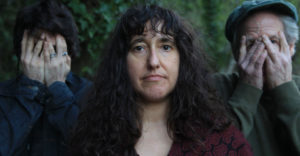 Against the Backdrop of Scientific Studies Proving the Healing Power of Music, Seattle Band Releases Innovative Single about Healing from Cancer through Song

On March 1, Iraqis in Pajamas releases, “Cancer Is My Engine,” whose production is being funded by the Lloyd Symington Foundation, which supports people living with and healing from cancer.

Seattle, WA – When Iraqis in Pajamas front woman Loolwa Khazzoom was diagnosed with cancer in 2010, she rejected the conventional option of surgery – despite a doctor proclaiming that she would die without it. “You can’t think your way out of cancer,” he said, to which Loolwa replied, “You don’t know what I can do.” Immediately following the diagnosis, Loolwa dove into researching natural approaches to healing, and she radically altered her diet – immediately pulling everything out of her cupboards and going on an all-organic and vegan diet. Through these and subsequent diet/lifestyle changes, Loolwa cold-stopped the growth of the nodules, which remained stable for the next five years. It was only after Loolwa returned to her lost love of music, moved to Seattle, and started her band, however, that the nodules began shrinking. Her song, “Cancer Is My Engine,” combines an ancient Iraqi Jewish prayer with original punk rock, sung in Hebrew and English – challenging conventional medical approaches to cancer and offering a new paradigm of music as medicine. Here is the song in development (scratch track from recent band practice), and here is the video with the back story of the song. The song is being produced by Bard Rock Studio, which specializes in working with independent music artists in the greater Seattle area.

Sample Endorsements
Loolwa Khazzoom is a brilliant lyricist and a dedicated artist, with the ability to teach through her art. Loolwa and her band, Iraqis in Pajamas, bring deeply personal truth through song and lyric and make us think through our own human reaction, through their profound and often cathartic performances. We need more of this!  We need more art that makes us think in this turbulent world. Loolwa is the pearl in the oyster of a nation in great need of more awareness and enlightened thinking. – Lara Lavi, Seattle-based Grammy award winning violinist

About Iraqis in Pajamas
Seattle-based band Iraqis in Pajamas fuses ancient Iraqi Jewish prayers with original punk rock and personal storytelling. Front woman and bass player Loolwa Khazzoom belts out tunes in Judeo-Arabic, Hebrew, and English, with Sean Sebastian on guitar and Robbie Morsehead on drums. In turn vulnerable and angry, haunting and inspiring, the band disarms audiences, opening them to deep contemplation about trauma, healing, and transformation – whether addressing domestic violence, cancer, racism, mental illness, street harassment, family caregiving, or national exile. Following the release of their single and accompanying music video for “Cancer Is My Engine,” Iraqis in Pajamas will be recording a double album, Punk iRock, sponsored by Allied Arts Foundation in Seattle – with the first CD being the original Iraqi Jewish prayers, along with a story about each prayer, and the second CD being the punk rock adaptation with original lyrics.

Singer, songwriter, and bass player Loolwa Khazzoom has had a meandering career as an educator, activist, journalist, health coach, book author, and more, all with the central organizing principle of individual and collective healing. Her work has been featured in top media including The New York Times and Rolling Stone; she has presented at leading venues including Harvard University and the Simon Wiesenthal Center; and she has published two books, taught throughout the Ivy League and at universities nationwide. Ultimately ditching her power suit and power point in favor of combat boots and cat glasses, Loolwa now offers bold songwriting as the catalyst for deep and heart-centered conversation.

Guitarist Sean Sebastian is a professional musician, as well as an audio engineer, film maker, founder of Off the Wall Artists Collective, and owner of Bard Rock Studios. Drummer Robbie Morsehead has been a professional musician for decades – touring nationally, recording numerous albums, and performing for notables including Seattle Supersonics and Microsoft.

The Science behind Music as Medicine
Can music really heal the physical body? Leading scientific research says yes. Studies on the healing powers of music are documented in books like The Power of Music (by NY Times best-selling author Elena Mannes) and The Healing Power of Sound (by oncologist Mitchell Gaynor MD), and the National Institutes of Health (NIH) recently launched three new studies on the healing powers of music. Quite simply, whether singing lullabies or sacred chants, mothers and religious leaders have known for millennia what scientists are only beginning to understand: Singing has the extraordinary power to uplift, transport, and heal us, as well as to connect us to the Divine. This shift in consciousness is why, after hearing a particular song, our mood may change abruptly, or we suddenly may feel transported back in time. Singing bypasses out mental process, both awakening and soothing us at the core, without effort. Among other benefits, we are able to access, release, and heal from the experience of trauma, without having to recount and risk getting triggered by painful memories. Below is additional information about and links to relevant data. Leading integrative medicine doctors in Loolwa’s network are available for expert medical commentary.